Cary Elwes
Donald Curtis is the antagonist of Porco Rosso. He is the archenemy of Marco Pagot and is the only one who can possibly best him. He is the pilot of Curtiss R3C-0. His father is American and his mother is Italian and they live in Alabama.

Donald is voiced by Akio Otsuka on Japanese and Cary Elwes on English.

Donald has brown hair and he wears a blue captain/pilot suit.

Donald has a very American attitude. He likes to show off and act as a leader to the pirates. He was originally in love with Gina, and wanted her to come act as a movie star in Hollywood, but he falls in love with every beautiful girl he sees, so ends up loving Fio Piccolo. 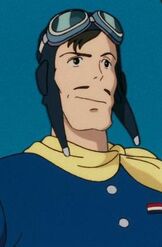 Add a photo to this gallery
Retrieved from "https://ghibli.fandom.com/wiki/Donald_Curtis?oldid=97300"
Community content is available under CC-BY-SA unless otherwise noted.