Hatter's Hat Shop is a hat shop featured in the film, Howl's Moving Castle. The shop includes Sophie's residence and a workshop.

Located in Market Chipping, the Hatter's hat shop is owned by Sophie's father, who bequeathed it to her stepmother Honey. Sophie was left in charge of the shop.

The shop led to a small courtyard with a door to the workshop and a staircase that leads into Sophie's bedroom. The exterior lies in the row house working class district.[1] The home is on the side of a railway, which passes daily.

Sophie, Bessie and several other needlewomen toil at the workshop, where they would occasionally be visited by the shop's proprietor Honey. One day, Sophie and the others spot Howl's castle wandering in the misty hills in the distant. Sophie would later be confronted at the shop by the Witch of the Waste. Due to Howl's magic, the castle's main wing is transformed into Sophie's old home and workshop.

As the war reached Market Chipping, the shop is destroyed after the city is firebombed.

In September 2011, Miniatuart released a limited edition 1/150 scale kit of the Hatter's hat shop. According to its official description, it is "Hatter's shop downtown with a cute, colorful walls. Sophie works here. Grandma Sophie is cursed by a witch... Made under the supervision of Studio Ghibli, attention to detail was carefully made in 360°. If you remember the scene in the film, it will not stop the excitement. There opens up the world of Howl's Moving Castle, the [Hatter's hat shop] in the palm of your hand!"[2]

Sophie trying on some hats by the displays.

Sophie's work area is right by the railway underneath.

Exterior shot showing the train the passes by.

Exterior of the hat shop.

Sophie tells off the Witch of the Waste at the shop.

The courtyard which leads to Sophie's bedroom and workshop. 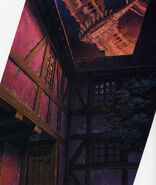 The courtyard as the city is firebombed. 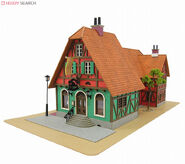