Koriko  (コリコ) is a city in the film, Kiki's Delivery Service. It is the main setting of the film and the place where Kiki settles as a witch-in-training. It is spelled Corico in the film's official artbook, and early concepts by Hayao Miyazaki and Takesato Oaza spelled the name as Korico.

When Kiki flies over the ocean by town, she sees the clock tower and meets the Clock Tower Caretaker. Down by the city, trams reminiscent of San Francisco ply the streets. There's a busy shopping district, a lively port area, a market, large open parks and quiet neighborhoods, many with a panoramic view of the sea. Osono's bakery Gütiokipänjä is located here.

The dirigible "Spirit of Freedom" lands docks near the city for repairs.

According to a pamphlet available during the film's release, the city where Kiki lives is called Koriko. The city depicted in the film freely interwove scenes and architecture from Stockholm and Gotland Island in Visby, Sweden, all of which were filmed by Ghibli staff during a research trip. Hayao Miyazaki personally traveled to Ireland in 1988, and additional imagery for the film were inspired by trips to San Francisco, Lisbon, the countryside of Paris and Naples. In the movie, a rescue firefighter's helmet read "Corico" instead of "Koriko". However, it is common for the letter c to be translated as k into many different languages. Miyazaki had previously visited Stockholm and Visby in 1971 while working for A-production (the studio behind Lupin the 3rd) during a research trip for the failed Pippi Longstocking project.

According to Miyazaki, "This is how the Japanese imagine an old European city. there are elements of Naples, Lisbon, Stockholm, Paris, and San Francisco, allmixed in, so one side faces the Mediterranean while the other faces the Baltic Sea [laughs]."

Miyazaki wanted to depict Europe had it not been through two major wars, thereby slowing the development of technology. Therefore, despite the film being set in the 80's, the use of black and white television, old vehicles and airships was still commonplace.

Stockholm, one of the many locations that inspired Koriko.

The map of Koriko.

The city tramway near the clock tower.

The railway station is on the left side of the screen in the ending scene. 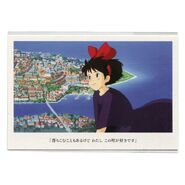 A postcard of Kiki with Koriko as the backdrop.

Kiki flying by the clock tower.