Laputa: Castle in the Sky

Laputa is the setting of the latter part of Laputa: Castle in the Sky. As the name of the film suggests, Laputa is an immense castle floating on an island in the sky. The opening credits showcase the development of the technology by which this is possible.

The film's protagonist, Pazu, has a photograph his father took when he glimpsed the almost mythical place. Because his father died still trying to prove Laputa's existence, Pazu dreams of finding it and proving his father right.  Along with Sheeta, a young girl who is the rightful heir to the throne of Laputa, Pazu eventually succeeds in his goal. However, thanks to the pursuit of Captain Dola and her gang of air pirates, and government agent Colonel Muska, and the subsequent events that take place there, much of the structure of Laputa is destroyed. The remaining, natural part of the island floats away to drift over the Earth undisturbed.

Laputa was once the heart of a very advanced civilization which utilized the power of a giant crystal of the element Aetherium ("Volucite" in the original Japanese and Streamline English dub) located within the island. In addition to making the entire island float, the crystal gave the Laputians the technology to create sophisticated robots and weapons. However, eventually the Laputians chose to leave the island; Sheeta speculates they came to realize the importance of maintaining their connection to the Earth below.

Another view of Laputa 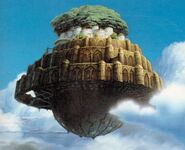 View of Laputa from above

Laputa's lower portion collapsing after Sheeta and Pazu speak the spell of destruction.

Laputa drifting away at the end of the film
Add a photo to this gallery
Retrieved from "https://ghibli.fandom.com/wiki/Laputa?oldid=113835"
Community content is available under CC-BY-SA unless otherwise noted.