Michael Keaton
Marco Pagot is the protagonist in the movie Porco Rosso. He is a human who was transformed into a pig. He is known as Porco Rosso, the bounty hunter.

He was a member of the Italian Air Force during World War I. Captain Marco Pagot was known for his piloting skills as well as his personal character. One famous story about him was that he once dived into the raging sea to save an enemy pilot. During the war, he saw best friends and fellow pilots from both sides of the war fall to their deaths. He was disgusted with the governments, their battles and their politics. He decided that he did not want to be a human anymore and so he became a pig. He became known as Porco Rosso, the Crimson Pig, and from then on flew only for himself. Since becoming a pig, he has become a bounty hunter in the Adriatic Sea. His service is often requested to aid passenger ships that are attacked by flying pirates. While Porco Rosso uses his ammunition to take down planes, he never kills anyone. Gina, owner of the famous Hotel Adriano, is one of his childhood friends. They have a very deep friendship that seems to border on something more. He is very charming towards ladies, even as a pig. He was 17 years old in 1910. The film takes place in early 1940. Therefore, at the time of the film, he was probably around 47 years old. 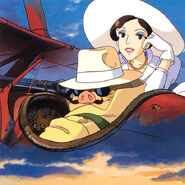 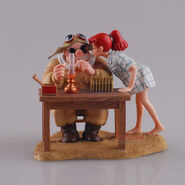 Marco as a Human in Fio's Hallucination

Marco Meets Gina
Add a photo to this gallery
Retrieved from "https://ghibli.fandom.com/wiki/Marco_Pagot?oldid=106055"
Community content is available under CC-BY-SA unless otherwise noted.