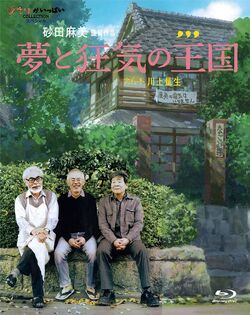 The Kingdom of Dreams and Madness (Japanese: 夢と狂気の王国 Hepburn: Yume to kyōki no ōkoku) is a 2013 Japanese documentary film directed by Mami Sunada. The film follows the routines of those employed at Studio Ghibli, including filmmakers Hayao Miyazaki, Isao Takahata, and Toshio Suzuki as they work to release two films simultaneously, The Wind Rises and The Tale of the Princess Kaguya.

The documentary delves into the life of Hayao Miyazaki and the productions of the animated films The Wind Rises and The Tale of the Princess Kaguya, including various footage of said productions. The footage shown includes the choosing of Hideaki Anno as the voice actor for the character Jiro Horikoshi in The Wind Rises as well as the extensive and detailed amount of storyboarding sketched, inked, and painted by Miyazaki. It notes Miyazaki's opinions on subjects such as the Fukushima Daiichi nuclear disaster and Mitsubishi A6M Zero, and shows his tensions with some of the other staff, including Isao Takahata, and his memories of his father. The film illustrates the importance of Miyazaki, Takahata, and Toshio Suzuki's works altogether to help Studio Ghibli be successful, and concludes with mention of Miyazaki's supposed official retirement.

Retrieved from "https://ghibli.fandom.com/wiki/The_Kingdom_of_Dreams_and_Madness?oldid=97555"
Community content is available under CC-BY-SA unless otherwise noted.