Therru (Teru) is a young girl and the tritagonist in the film adaptation of Tales from Earthsea. She is also a Dragon-Lady (a woman who can take the form of a dragon).

Therru has two strands of brown hair in the front tied with red ribbons while the rest of her hair remains short in the back and a large burn scar on the left side of her face from where her parents burned her. Therru's attire is a plain, dark pink jumper with a lighter, long-sleeved pink shirt under it as well as a white apron in the front.

It is hard to earn Therru's trust easily, probably due to being abused by her birth parents. She is tough when she needs to be, independent, and speaks her mind. While it takes a while to get to her center, she has a good heart and is very caring towards her acquaintances and any animal alike.

When Lord Cob tries to strangle Therru to death, he believes the he has succeeded and starts walking away until she tells him to stop, which makes Cobb turns around and he is shocked to see that she is immortal. Cobb starts hobbling towards her rasping "Eternal life" and tries to reach to her as if to take some of her immortality for himself. Before he can reach her, she transforms into a dragon and blows a ball of flame onto him. He catches on fire and stumbles back, triggering the already loose cut stone and falls to his death.

Therru does not like Arren at first because he says he said "Life is nothing to me," when about to fight the slave traders. Therru later tells him she despises people who do not value life. After Therru is captured by the slave traders, Arren comes and rescues her. Surprisingly she does not show her appreciation to being rescued as she slaps Arren's hand away when he tries to help her up. She eventually accepts him and they team up to save Sparrowhawk and Tenar from Cobb.

Tenar is like her mother and cares for her as if she is her own. She rescued Therru from the streets after her birth parents abused her, such as burning her face, thus leaving that large scar..

As Tenar reveals, Therru never talks to strangers, but after Sparrowhawks' arrival to their farm, he speaks kindly to her and she accepts him. 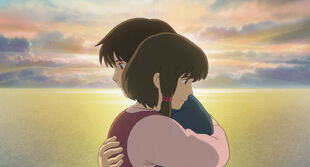 Arren hugs Therru (in love)
Add a photo to this gallery
Retrieved from "https://ghibli.fandom.com/wiki/Therru?oldid=101778"
Community content is available under CC-BY-SA unless otherwise noted.