Whisper of the Heart

Whisper of the Heart by Aoi Hiiragi 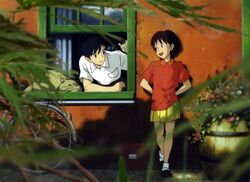 Whisper of the Heart (Japanese Hepburn; ​Mimi wo Sumaseba​' literally If you listen closely) is a 1995 Japanese anime film directed by Yoshifumi Kondo. Its original Japanese title is Mimi wo Sumaseba (耳をすませば?), which means "if you listen closely". The film is based on the manga of the same name by Aoi Hiiragi. The screenplay was written by Hayao Miyazaki. This is the first theatrical Studio Ghibli feature to be directed by someone other than Miyazaki or Takahata, and the only film to be directed by Yoshifumi Kondō, who died in 1998 of a ruptured aneurysm at age of 47. Studio Ghibli had hoped that Kondō would become the successor to Hayao Miyazaki and Isao Takahata.

One summer evening in 1994, Shizuku Tsukishima, a junior high school girl living in Tama New Town, a Tokyo suburb, looks through the checkout cards in her library books and notices a pattern: Each book had previously been checked out by someone named "Seiji Amasawa". The next day at school, Shizuku shows her friend Yuko a draft of the song she has been writing for graduation. On the way home, Shizuku realizes she left her book at the school. She rushes back, only to find a boy her age reading it. He hands it back to her and comments on her lyrics, calling them "corny" — which leaves her feeling irritable for the rest of the evening.

The next morning on the train, Shizuku sees a large cat apparently traveling by itself. When it gets off, she follows it to an antique shop, where she sees a statue of a cat in formal clothing. The owner of the shop, Mr. Nishi, tells her the statue's name is Baron Humbert von Jikkingen. He also shows her a recently restored grandfather clock, that tells a tale of the King of the Dwarves and a Fairy Queen. Shizuku is in awe, considering the shop a place where stories begin. Shizuku notices that it is noon and rushes off to take lunch to her father, but forgets her lunchbox in the shop. Just outside the library, the boy she had met the previous day returns the lunchbox. He comments on how much food is in the box and rides away, singing her song, leaving Shizuku in another foul mood.

Later, Shizuku goes to visit the antique shop again and finds it closed. The boy shows up and lets her in to see The Baron. Downstairs, she sees his workshop, where he is making a violin. She asks him to play, and he complies on the condition that she will sing along. Midway through the song, Mr. Nishi and two friends arrive and play an accompaniment, and Shizuku learns that the boy is in fact Seiji Amasawa, the same person who had checked out all the library books. On the way home, he tells her his dream is to become a master Luthier. He is fighting with his parents for the chance to go to Cremona, Italy to study with a master. He compliments her on her lyrics and tells her she is talented.

The next morning at school, Seiji tells Shizuku his parents will allow him to go to Cremona for two months to study with a master to see if he shows potential. The two confess that they have feelings for each other, and Seiji admits that he checked out all those library books hoping it would get her attention. That evening, Shizuku tells Yuko she worries she is not good enough for Seiji, since he seems to know what he wants to do in life. She decides to test her talent, too; she will write a book to see if her skills are good enough. She asks Mr. Nishi's permission to write about The Baron in her story. He agrees, provided he is allowed to be the first to read it.

Shizuku begins to devote all her time to working on her book, and her grades start to slip. Her parents are concerned but decide to trust her. When it is finished, Mr. Nishi reads it and tells her it is very good but not yet perfect. Shizuku decides that attending high school is the best way to learn more about writing.

Early the next morning, Shizuku looks out her window and sees Seiji below. He tells her to get on the back of his bike, and they ride to a steep hill, which he says he wants to ride up carrying her. But she hops off to help push, saying she wants to help him, not be a burden to him. They make it to the top and look out at the incredible view, waiting for the sunrise. He tells her he has decided to finish high school, then go back to Cremona to study. Shizuku thanks him for pushing her to do her best and learn more about herself. Seiji asks her if, once he becomes a luthier, she would consent to marry him. She happily tells him she hoped it would be that way and agrees. Seiji then hugs Shizuku and loudly proclaims that he loves her.

The fantastical backgrounds in the fantasy sequences of the film were created by Japanese surrealist painter Naohisa Inoue and were directed by Miyazaki. The wood engraving of the imprisoned musician was created by Miyazaki's son Keisuke Miyazaki, a professional wood artist. Japanese musical duo Chage and Aska's short music video, titled "On Your Mark", by Studio Ghibli was released along with this film. Miyazaki wrote the screenplay and drew up the storyboards used in the film, along with acting as the general producer. The film's art direction was headed by Satoshi Kuroda.

During the closing credits, Shizuku and Seiji can be seen at the top of the screen, riding over the bridge on Seiji's bicycle. Later in the credits, Yuko meets Sugimura on the bridge and they walk off together. On the American (Disney) version of the DVD, these closing scenes are fully visible in the English-language version of the film. However, in the Japanese-language version on the same DVD, the top of the screen is cropped during the closing credits, cutting off the heads of the people passing over the bridge.

Whisper of the Heart was based on the manga Mimi o Sumaseba which was originally created by Aoi Hiiragi. The manga was serialized in Shueisha's shōjo manga magazine Ribon between August and November 1989, and a single tankōbon volume was released in February 1990. The volume was reprinted on July 15, 2005. A second manga by the same author titled Mimi o Sumaseba: Shiawase na Jikan was serialized in Shueisha's Ribon Original in 1995. A spiritual sequel to this film adaption, The Cat Returns, was turned back into a manga by Aoi Hiiragi, under the name Baron: Neko no Danshaku.

In the film, Shizuku creates translations of the song "Take Me Home, Country Roads" (originally co-written and recorded by John Denver) into Japanese for her school's chorus club. She also writes her own humorous Japanese version of the song, called "Concrete Road", about her hometown in western Tokyo. The songs were actually translated by producer Toshio Suzuki's daughter, Mamiko, with Miyazaki writing supplemental lyrics. These songs play a role at various points in the story. A recording of "Country Roads", performed by Olivia Newton-John, plays during the film's opening sequence, as does Yoko Honna's version at the end.

This was the first Japanese film to use the Digital Dolby Digital sound format. An English dub of this film was released by Buena Vista Home Entertainment on March 7, 2006. Turner Classic Movies televised both the dubbed and subbed versions on January 18, 2006 as part of their month-long celebration of Miyazaki (in honor of his birthday, January 5). The English title, Whisper of the Heart, was created by Studio Ghibli and used on several officially licensed "character goods" released around the same time as the film was released in theaters in Japan.

Over the course of the film, Shizuku is working on a fantasy novel that revolves around a cat figurine, named The Baron, that she sees in Mr. Nishi's antique store. The short fantasy scenes that depict what she is writing in her novel were so popular with fans that Studio Ghibli released a film based on the baron in 2002 The Cat Returns.

Whisper of the Heart was the highest-grossing Japanese film on the domestic market in 1995, earning ¥1.85 billion in distribution income. Whisper of the Heart received very positive reviews from film critics. It has a 91% approval rating on review aggregator Rotten Tomatoes, based on 11 reviews. Time Out London included Whisper of the Heart in their Top 50 Animated Film list. It was also included in Film4's Top 25 Animated Film list. On Anime News Network, Michael Toole gave it an overall grade of A-, calling it "beautiful and evocative; a fine tale of adolescent yearning and aspiration."]

General producer and screenwriter Hayao Miyazaki defended the film's ending, saying that it was his idea. Miyazaki wanted Shizuku and Seiji to "commit to something."

References to other Studio Ghibli films

Retrieved from "https://ghibli.fandom.com/wiki/Whisper_of_the_Heart?oldid=99506"
Community content is available under CC-BY-SA unless otherwise noted.