Yūko Ogino (荻野 悠子 , Ogino Yūko) is a working-class female, the wife of Akio Ogino and the mother of Chihiro Ogino in the Japanese animated film Spirited Away.

As punishment for her crimes against the Spirit World, Yūko is cursed and transformed into a pig for much of the movie.

Yūko has lightly-tanned skin like her husband and daughter. She has neatly-styled, short, brown hair, thin eyebrows and small, dark-colored eyes. She is fairly fit, compared to her husband, and wears gold earrings as well as a matching, gold necklace, and lipstick. She wears a pink sweatshirt and white capri-like pants.

She initially appears a very calm, collected and logical woman who refuses to comply with her husband's curious antics and is always first to speak of safety in a sign of danger or strangeness; nevertheless, she quickly gives in to Akiichirō's adventurousness, consequently turning both her husband and herself into pigs for much of the film.

Not much is known about Yūko's past, except for the fact that she and her family have decided to move from an unnamed location to another. Unfamiliar with the roads there, her husband misses a turn and compensates by driving over a footpath in hopes of eventually reaching their new house in Tochinoki. He nearly drives the car into a stone statue and revels in the architectural beauty of the Spirit World Tunnel. Curiosity piqued, Yūko then follows Akiichirō and Chihiro through the tunnel, unwittingly stepping into the Spirit Realm.

At first telling her husband to quickly return due to the general strangeness of the Spirit Realm, she quickly gives in to the clean, fresh environment and shows half-hearted regret for not taking sandwiches out of their car for a picnic. She then follows Akiichirō to a street full of unoccupied Food Stalls brimming with cooked meals. Entranced by the food, she quickly falls under a spell and eats unstoppable, leaving Chihiro to explore the landscape on her own. Yūko is then seen with her husband at the same food stall at night, both of them having been turned into pigs for their crime of devouring food for the spirits so greedily.

She is next seen sleeping alongside her transformed husband (as pigs) in the pigpen, completely forgetting that she was once a human and ignoring Chihiro's calling. Yūko is not seen until the end of the movie where she and Akiichirō are waiting for Chihiro by the Red gate, forgetting about their experience as pigs after the dispelling of their curse. Completely unaware of how much time has passed, Yūko exclaims at how dusty and dirty the car has become, and dismisses the mess as a prank/joke as the film ends. 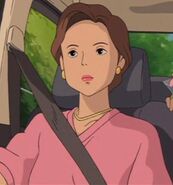